In some countries where sire and dam may live thousands of miles apart, or where contagious diseases such as Brucellosis exist, then artificial insemination(AI) of dogs is considered the norm. In the UK natural matings are by far the most common method of producing puppies. (And indeed for KC registered dogs there are regulations to be followed, please check the KC website for up to date information)

AI however does have its place for inseminating imported semen, frozen semen and semen of poor quality, and for inseminating a bitch if a natural mating is not possible. For example if the stud has suffered an injury, or if the bitch will not allow mounting/mating by a particular dog. Some anatomical abnormalities of the female reproductive tract will mean AI is the only chance that bitch will have of producing puppies. The abnormality should obviously not be of a hereditary nature

There are three ways of performing artificial insemination 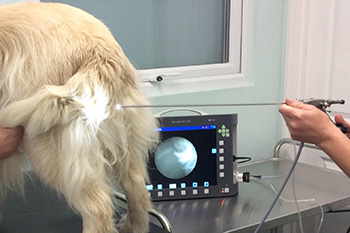